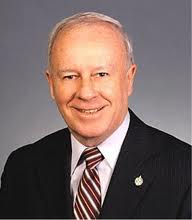 The Honourable Ambassador Loyola Hearn was appointed as Canada’s Ambassador to Ireland in 2010. Loyola Hearn started as a teacher in Renews and Trepassey, Newfoundland and Labrador before embarking on his political career. He first stepped into Province’s House of Assembly in 1982 until 1992, serving as Minister for Education from 1985 to 1989. After this he moved up the ladder entering federal politics being elected into parliament in 2000 as a member of the Conservative Party of Canada.

Loyola Hearn was named Minister of Fisheries and Oceans on February 6, 2006 following his victory in the federal elections.