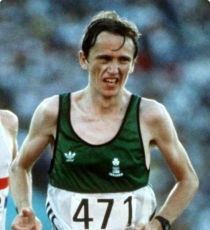 John Treacy won a silver medal in the 1984 Olympic Games, in the category of Men’s Marathon. He represented Ireland between 1980 and 1992 at four Olympic Games. Treacy has held onto his passion for sports in Ireland while working as the Chief Executive of the Irish Sports Council.

His running career took off in 1978 when he won the IAAF Cross Country Championship in Glasgow. That same year at the European Athletics Championships in Prague he placed 11th in the fast 10,000-metre race and fourth in the slow and tactical 5,000-metre race. After this success there was little to stop Treacy’s star from rising, he went onto win the IAAF Cross Country Championship again in Limerick in 1978 before going on the represent Ireland in four consecutive Olympics and world Athletic Championships.

John Treacy ran competitively until 1995, winning several medals along the way. He retired following a road race held in his honour in Waterford.