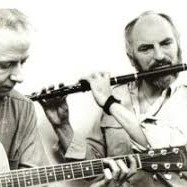 Matt Molloy is an Irish musician, from a region known for producing talented flautists. As a child, he began playing the flute and won the All-Ireland Flute Championship at nineteen. Considered as one of the most brilliant Irish musicians, his style that adapts piping techniques to the flute has influenced many contemporary Irish flute players.

During the 1970s, MATT Molloy was a member of The Bothy Band and its successor, the re-founded Planxty.

He joined The Chieftains in 1979, replacing Michael Tubridy. Over the course of his career, HE has worked with the Irish Chamber Orchestra, Paul Brady, Tommy Peoples, Micheál Ó Súilleabháin and Dónal Lunny. MATT owns a pub on Bridge Street in Westport, County Mayo which is well known for having music sessions with many different musicians.