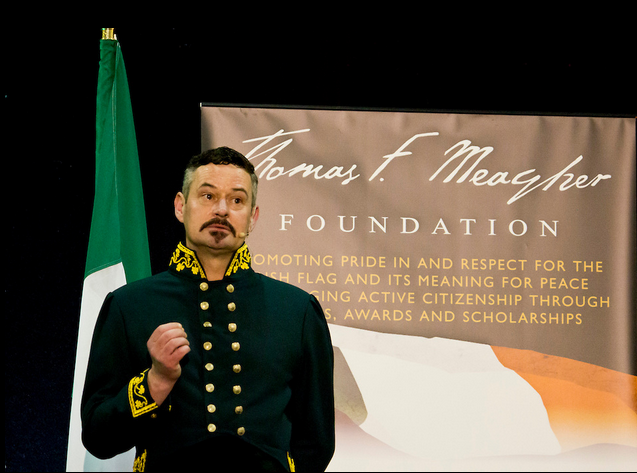 On March 12th, 2015, the Thomas F. Meagher Foundation held the first School’s Presentation event, which took place in Waterford at the Kingfisher Club, with a speech by our special Guest of Honour, President Michael D. Higgins.

As well as revealing details of this exciting new initiative, pupils from more than 300 schools learned a little more about how to take part in Flag Week 2016.  President Higgins also dedicated the fabulous new Thomas F. Meagher Bridge spanning the River Suir.  Speaking at the Foundation's event in Waterford, President Higgins said: "At a time when we are witnessing an upsurge of extreme and exclusive forms of nationalism throughout Europe, based on the rejection of the other, it is important that we, Irish, reaffirm strongly that the Irish Tricolour is an emblem of peace and brotherhood between the various communities who live on the island of Ireland, as well as a reminder of the bonds of friendship that tie us to other nations across the world.”

The civic leaders were joined by Captain David Barry, Officer Commanding Naval Operations Command and other senior members of the Irish Defence Forces.
Also speaking at the event, the chairperson of the Thomas F. Meagher Foundation, Rev Cavanagh said “It is the hope of the Foundation that every second level school will have received a tricolour by March 2016”.

Later in the day, President Higgins formally dedicated the new bridge, which spans the River Suir as the Thomas F. Meagher Bridge.  The bridge links counties Kilkenny and Waterford and is the longest bridge to span the state.

To build upon the initial success, the Foundation will continue to promote its core aim to foster pride in and respect for the Irish Flag and educate students regarding its background and true symbolism for peace.  Each second level school will receive a formal invitation by the State to receive the Irish Tricolour in Croke Park on Thursday 7th March 2016 at 11am.