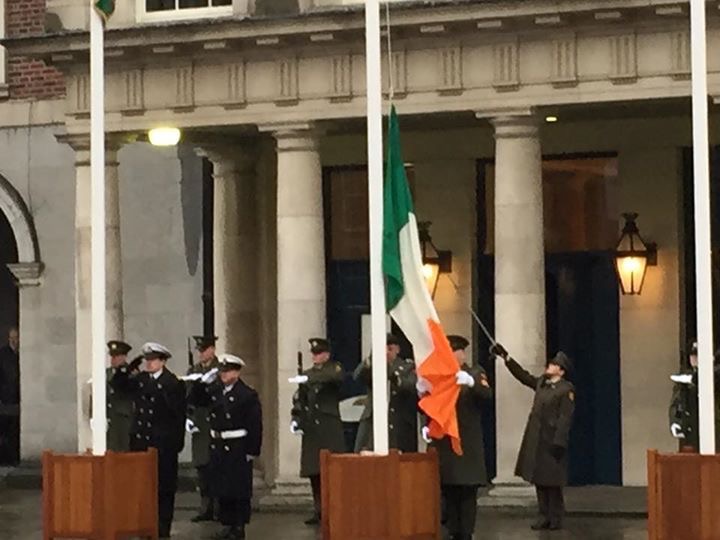 Reverend Michael Cavanagh (CoI), chair of the Thomas Francis Meagher Foundation which promotes Pride in and Respect for the Irish Flag and its meaning for Peace, welcomed the Flag raising ceremony in Dublin Castle.

The 2016 Programme of commemorative events began on Friday 1st January in Dublin Castle.  A symbol of peace and reconciliation, the National Flag of Ireland, was raised at Dublin Castle with the President in attendance

The Irish flag was raised at the first official state ceremony for 2016. With the assistance of the Foundation the flag used in this ceremony was previously flown over 33 the Mall in Waterford where Thomas Meagher first flew a tricolour in 1848.

Reverend Cavanagh explained 'The Irish Flag and its significance is as important today as it was when Thomas Meagher first raised it and explained its symbolism in words of great significance: "The white in the centre signifies a lasting truce between orange and green. I trust beneath its folds the hands of the Irish Catholics and the Irish Protestants may be clasped in generous and heroic brotherhood"’

He welcomed the new additions to the protocol and guidelines of our National Flag. The first tricolour flag was raised on 7th of Mach 1848 and flown continuously day and night until removed by the authorities. On Easter Monday 1916 it was raised for the second time, again flying by day and night. This year will be the first year that protocol will allow for the flag to be flown at night - provided it is illuminated - so it is entirely appropriate to fly the flag with pride and respect at all times."

Throughout 2016, there will be ceremonies, events and programmes marking the significance of the Flag in the historical and cultural narrative in the 100 years since the Rising, with a particular emphasis on conveying its message to the Nation’s young people.