2015 Renaming Ceremony of the Suir Bridge in Honour of Thomas F. Meagher

One of the last major infrastructural projects to be unveiled in Ireland in recent years was named after the patriot who first raised the green, white and orange tricolour in 1848 which became our national flag.

The bridge, which spans the river Suir outside Waterford and was opened in 2009, and was named the Thomas Francis Meagher Bridge, in honour of the man who played a key role in the 1848 rebellion before being transported abroad and ending up as a friend of President Lincoln and governor of Montana. 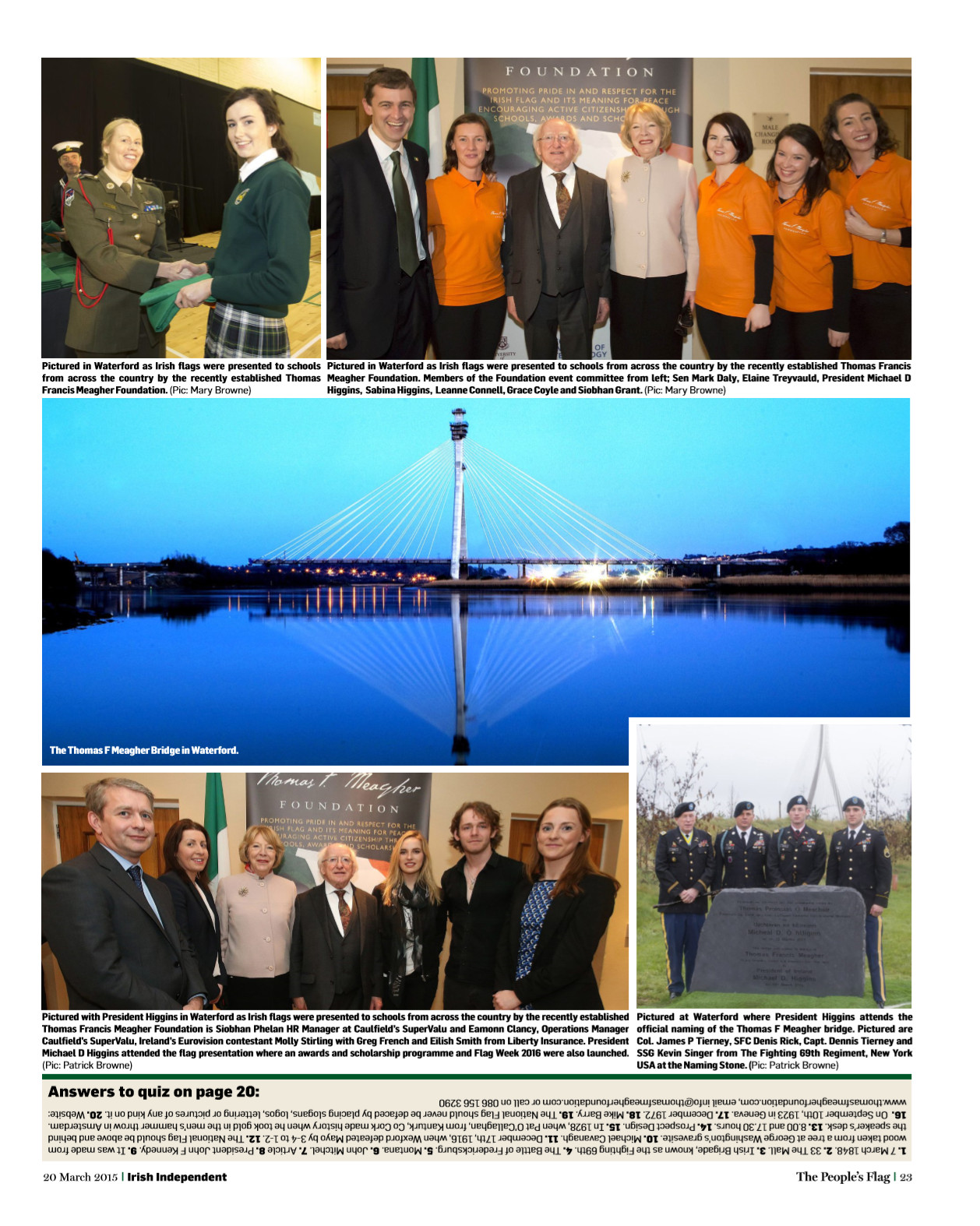 The decision was backed by the Thomas F. Meagher Foundation and the 1848 Tricolour Celebration Committee on foot of a motion submitted by the mayor of the city and county, James Tobin, and passed by the local council.

Chair of the committee Ann Cusack said they were “absolutely thrilled” the idea had been supported both by Waterford City and County Council and Kilkenny County Council.

This year will see the fifth annual event held by the 1848 committee to mark the significance of Thomas Francis Meagher in Irish and American history. “We have seen the importance of the celebration grow exponentially every year,” Ms Cusack said yesterday.

“Our celebration continues to be supported by a number of ambassadors and embassies from the US, Canada, France, Australia, and the UK. Such is the importance of Thomas Francis Meagher to the US 69th Infantry Division (New York), or the Fighting 69th as it has become known due to the Meagher connection, that every year a high-level delegation come to Waterford to celebrate the raising of the first ever tricolour, by Thomas Francis Meagher, on March 7,1848, at 33 The Mall.”

The river Suir bridge is part of the N25 Waterford bypass and the longest single-span bridge in the Republic .

The Presidents Speech at the Renaming Ceremony of the Suir Bridge in Honour of Thomas F. Meagher

It is a great pleasure to be here with you all to rename the Suir bridge, that spans the River Suir between Waterford and Kilkenny, “the Thomas Francis Meagher Bridge.” As President of Ireland, I am glad to have the opportunity to honour this great patriot and son of Waterford, who pursued the cause of Irish freedom with unforgettable eloquence. Seen from a distance, the white stay cables fanning out from the bridge’s central tower give the whole the appearance of two wide open, aerial sails suspended over the water surface. A bridge is certainly an apt symbol to pay tribute to Thomas Meagher’s vision of concord between Ireland’s various traditions and communities – “between the Green and the Orange”, as he put it.

It is indeed appropriate that a construction of such evident public worth also be used as a vehicle for ethical commemoration – a means to keep alive amongst our citizens the memory of those men and women who gave of their intellects and their lives to shape the values we hold dear as a nation. Of course, as all of the elected representatives here know, we must ensure that this public memory makes space for the plurality of Ireland’s political traditions, that it reflects the diversity as well as the complexity of our past, and that it also does justice to the role played by women in that past.

The history of Waterford’s bridges provides a good illustration of the shifting strategies of naming in different historical contexts. When Thomas Meagher was living in Waterford, he would have crossed the River Suir on the Timber Bridge, known locally as “Timbertoes.” This structure endured until 1913, when it was replaced by “The John Redmond Bridge.”  On the day of the inauguration, as John Redmond himself was getting off the train to be greeted by the crowds, there occurred what

The Waterford Express described as “a suffragette incident”: a lady pushed her way towards him and boldly asked: “Will you open a free bridge to votes for women?” To which question the leader of the Irish Parliamentary Party responded, the newspapers tell us, with a mere polite smile. The Redmond Bridge having become obsolete, a new bridge was open in 1984, named after a figure who is connected to both Kilkenny and Waterford, Edmund Ignatius Rice.

Today, through the naming of the “Thomas Francis Meagher Bridge”, we are inscribing the Revolutionary nationalism of the Young Irelanders as a further layer in the local memorial landscape. Few Irish patriots have appealed so warmly to the popular imagination in their own time as has Thomas Francis Meagher in the mid-19th century. Eloquent, generous, passionate, courageous and handsome; in turn orator, journalist, lawyer, revolutionary, convict, soldier in the American civil war and Acting Governor of Montana – there is a picturesque, almost literary, quality to Meagher’s personality and life, which continues to capture our imagination. In so many ways, Thomas Meagher is characteristic of that generation of 1848, who, throughout Europe, from the Polish lands of the Austrian Empire’s Eastern frontier to Italy, from Denmark to France and Italy, fought against tyranny, to vindicate liberty and the self-determination of oppressed peoples. If that generation of “the Spring of Nations” continues to captivate, it is, perhaps, because it takes us back to the roots of the modern democratic movement. Or it may be that the participants in those national emancipation struggles are wrapped in that particular aura attached to those who do not hesitate to risk everything in the pursuit of their ideals. Thomas Francis Meagher was such a man. Born in Waterford in 1823 the eldest son of somebody who, historians would agree, was the city’s very conservative Mayor – in fact Waterford’s first Catholic Mayor since the Cromwellian period – Thomas Francis grew to become a rebel and a socialist, joining the Young Ireland movement at the age of twenty.[1] The desperate poverty then prevalent among the city dwellers of Waterford stoked the revolutionary zeal of young Meagher. In his biography, Paul R. Wylie thus relates how he would lead local children on hikes up “Mount Misery” and look down on the bay to see the emigrant ships departing for America.

Meagher flew what is now our national flag for the first time at the Wolfe Tone Club in Waterford on 7th March 1848. In April of the same year, he returned from Paris, the epicentre of the 1848 Revolution, with a ceremonial silken tricolour of orange, white and green, which he described in the following words: “The white in the centre signified a lasting truce between Orange and Green. I trust that beneath its folds the hands of the Irish Catholic and the Irish Protestant may be clasped in generous brotherhood.” These words still resonate with us, as do indeed Meagher’s powerful calls for fraternity between all of the citizens of Ireland, and his rousing emancipatory rhetoric. For Thomas Francis Meagher is remembered above all as “the National Orator.” As Arthur Griffith put it in his 1916 preface to the collection of Meagher’s speeches from 1846 to 1848, the Young Ireland movement had its philosophers, its poets, its statesmen, but with Meagher, “it gave to Ireland the National Tribune.”[2] The failure of the Irish revolt of July 1848, however, caused Meagher to be deported to Tasmania, sentenced to life transportation, and never to see Ireland again. Yet, this did not put an end to the man’s feats. Having escaped from the penitential colony on a small boat, Meagher was picked up by an American whaler, on which he worked for over a year, before landing in Connecticut in 1852. Then started “the American period” of his life, which saw his engagement on the side of the Union during the American Civil War, and for which he is, to this day, vividly remembered in the United States. On the 28th June 1963, in the introduction of his address to the Irish Parliament, John FitzGerald Kennedy had those words to evoke the actions of the Irish Brigade, which was led into battle by Thomas Meagher:[3] “They bore a proud heritage and a special courage given to those who had long fought for the cause of freedom.” Today the Brigade’s green banner with a gold harp, which President Kennedy presented to the Irish people on that visit, is displayed prominently in Leinster House, reminding us of the deep bonds of friendship between our two nations. The last years of Meagher’s life, his work as Acting Governor in the untamed lands of Montana, his altercations with the powerful local vigilantes, and his mysterious death in 1867 on a paddle steamer on the Missouri River – these episodes also pertain to the stuff of legend. And of course one must not forget, in the list of Meagher’s achievements, this very last one, namely the uniting of Waterford and Kilkenny! I am very pleased, therefore, to declare this bridge officially renamed “The Thomas Francis Meagher Bridge” – and to thus honour, with you all, the memory of this great patriot and orator; of this artisan of the friendship between Ireland and the United States; and of this visionary who, in 1848, called for “a lasting truce between Orange and Green” to become the enduring symbol of the Irish Nation.

[1] The excellent education Meagher received at Clongowes and then at a Jesuits’ College in Lancashire, England, means that Meagher could never get over declaiming his flaming nationalist harangues in a pronounced English upper class accent.

[3] With disastrous effect: of the 1,200 men who took part in the great assault of 13thSeptember 1862 against the Southern Confederate Forces of General Lee, only 280 survived the battle. Meagher was a brave, but terrible, commander, driving his men into suicidal engagements (which, to his credit, he always led from the front).