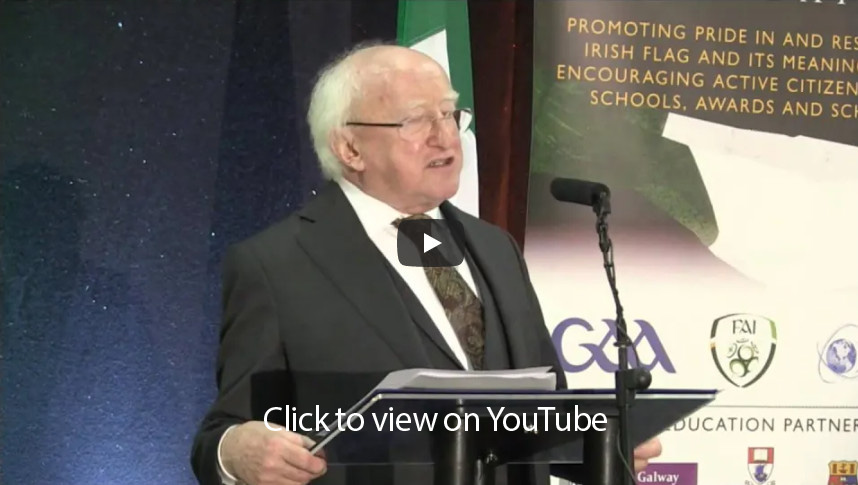 “May I, as President of Ireland, congratulate all those involved with the Thomas Francis Meagher Foundation for their important work in fostering a better understanding of the history and meaning of the Irish Tricolour amongst all of our secondary school students”.

Here you can view the entirety of President Higgins speech at the First School’s Presentation Event in County Waterford.

[I am very pleased to be here with you all in Waterford for this ceremony during which our national flag will be presented to representatives of 285 schools across Ireland. May I, as President of Ireland, congratulate all those involved with the Thomas Francis Meagher Foundation for their important work in fostering a better understanding of the history and meaning of the Irish Tricolour amongst all of our secondary school students.]

At a time when are witnessing an upsurge of extreme and exclusive forms of nationalism throughout Europe, based on the rejection of the other, it is important that we, Irish, reaffirm strongly that the Irish Tricolour is an emblem of peace and brotherhood between the various communities who live on the island of Ireland, as well as a reminder of the bonds of friendship that tie us to other nations across the world.

Indeed we are fortunate that one of the most recognisable symbols of our shared Irishness is a banner whose pattern of colours is one that conveys a vision of concord and harmony. In the famous words of Thomas Francis Meagher, the Irish rebel and son of Waterford who flew the Irish Tricolour for the first time on 7th March 1848:

“The white in the centre signifie[s] a lasting truce between Orange and Green. I trust that beneath its folds the hands of the Irish Catholic and the Irish Protestant may be clasped in generous brotherhood.”

Few Irish patriots have appealed so warmly to the popular imagination in their own time as has Thomas Meagher in the mid-19th century. Eloquent, generous, passionate, courageous and handsome, Meagher inspired both personal affection and public trust amongst his contemporaries. In turn orator, journalist, lawyer, revolutionary, convict, soldier in the American civil war and acting Governor of Montana – there is a picturesque, almost literary, quality to Meagher’s life, which continues to capture our imagination.

Importantly, we must remember that Thomas Meagher belongs to a history that is not solely Irish: in so many ways, he encapsulates that extraordinary generation of 1848, who, throughout Europe, from France to Poland, from Denmark to Italy, put their lives on the line to overthrow tyranny and despotism, and to vindicate the liberty and self-determination of oppressed peoples.

These were times when serfdom had not yet been abolished in the Austrian Empire, when the workers of Paris and Berlin lived in appalling conditions, and when desperate misery prevailed in famine-stricken Ireland.

The Irish Tricolour, which started springing up – on the platforms of nationalist public meetings, pinned to jacket lapels – during that seminal year 1848, thus takes us back to the roots of the modern democratic movement. It connects us to that period of effervescence, when ideas about democratic participation, freedom of the press, workers rights, and the political rights of colonised nations were proclaimed and exchanged.

Ideas and aspirations, then, as well as symbols, do travel. It is interesting to note how, in a previous generation, Thomas Francis Meagher’s paternal grandfather had been part of the 1798 rebellion, a Republican movement influenced by the French Revolution, which caused him to be carried to Newfoundland on a ship owned by Edmund Rice, who had arranged for a number of such people to escape repression.

The Irish Tricolour which Thomas Meagher flew for the first time at the Wolfe Tone Confederate Club in Waterford was itself inspired by the French Tricolour – the green and orange replacing the blue and red, but retaining the unifying white, and affirming the same underlying principal of popular sovereignty.

A month later, in April 1848, Thomas Meagher returned from Paris, where he had hoped to gather support for an Irish uprising, with a ceremonial silken Irish Tricolour which he produced at a meeting in Dublin.

When he saw the flag, his friend and comrade in the Young Ireland movement, John Mitchel, said:

“I hope to see that flag one day waving, as our national banner.”

After many intervening developments, this wish has come true – and the Tricolour is recognised everywhere, both inside and outside of Ireland, as a distinctive marker of Irish national identity and culture.

The Tricolour is not the only Irish flag to have journeyed across seas and national boundaries. Indeed the figure of Thomas Meagher is associated with yet another travelling flag, namely that of the Irish Brigade which he led into battle against the Southern Confederate Forces during the American Civil War.

The Brigade’s green banner with a gold harp was presented to the Irish people by President John FitzGerald Kennedy during his visit to Ireland in June 1963. Today this flag is displayed prominently in Leinster House, at the bottom of the Seanad staircase, reminding Irish Parliamentarians as well as American visitors of the deep bonds of friendship that unite our two nations.

The Irish Tricolour, then, is a powerful emblem of brotherhood and peace. It is a symbol of our generous, inclusive Irishness – a symbol we exhibit to manifest our pride at sporting events, but also one we readily share with others, especially on these days of Saint Patrick’s festivities, when so many people around the world, whether Irish citizens, members of the Irish diaspora, or simply friends of Ireland, will be wearing the green, white and orange.

May I, once again, thanks the Thomas F. Meagher Foundation for promoting the powerful and positive symbolism of our national flag, and for keeping alive the memory of Thomas Francis Meagher, as a man whose eventful life connects us to an important chapter, not just in Irish history, but also in the history of other European countries and of the United States.

We remain indebted to this man who, in 1848, called for “a lasting truce between Orange and Green” to become the enduring symbol of the Irish Nation. This is indeed a vision worth championing, a message of peace we must continue to cherish.